At work, I only keep emails in my inbox when I have to take action on them. Right now, I have 18 emails in that inbox. The sad news is that I haven’t had that inbox empty for about two years, but I’m making a goal to have it at zero by July 1.

The Mailbox app has been getting a lot of hype since it had over 800,000 people on its wait list a month ago. It took me  three weeks before I finally made it to the front of that line, and boy was I immediately disappointed.

Why was I disappointed? Because I had 483 emails in my Gmail inbox that Mailbox wanted me to clear.

(Side note: Mailbox only connects to Gmail right now.)

Granted, Mailbox was created to make emails easy to clear from an inbox, but I didn’t want my thumb to go numb as I tried to clear them all at once.

Fortunately for me, I was inpatient. 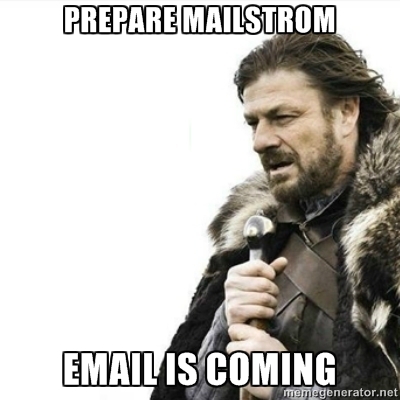 While I was somewhere between 400,000 and 200,000 in line for Mailbox, I went looking for another solution that might be similar to Mailbox but without a long wait. After some hunting, I found Mailstrom, which is currently in beta and has a wait list. I figured it wouldn’t hurt to be in two wait lists, so I signed up and found myself much closer than Mailbox being 11,000 in line.

Though this line moved slower than the Mailbox line, I was at the front soon enough and I was floored by what followed.

Mailstrom sorted my emails by sender, subject line, time, social network, and more, which made sorting them into folders much easier. Each time I selected a folder to sort the emails into, Mailstrom gave me the option of setting a rule so that all emails from that sender/with that subject line/etc. would go into that folder. SO HELPFUL!

Before I knew it, I had just two emails in my inbox.

(Before I skip ahead, let me say something about my Gmail emails. Most of them are personal or social network related. Though a lot of those emails get replied to right away, some just sit there. So I followed this piece of advice from an interview with Guy Kawasaki: “You can delete anything 21 days and older, and it won’t matter.” I went through the last three weeks, made sure nothing important was in there, and I moved all of those emails into folders—because I’m too afraid to actually delete emails.)

I opened up my Mailbox app and it looked beautiful. With two quick swipes, my inbox was empty. And I rejoiced with this beautiful message:

Since that day…yesterday…I have kept my personal inbox at zero, and I plan to keep it there.